Adaptation is one of SymbioticA’s long term projects featuring a dynamic program of production based artist residencies and events.  Based around the ecosystem of Lake Clifton south of Mandurah in Western Australia, home to the largest lake-bound thrombolite reef in the southern hemisphere, Adaptation offers a microcosmic peak into the broader issues of ecology and life itself. 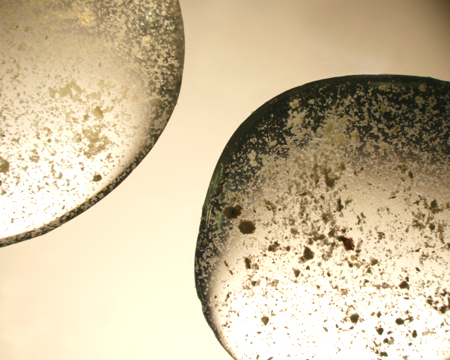 Familiar processes of studying particular environments and acquiring information through sensual immersion and visual interpretation were rapidly expanded upon during my time at SymbioticA. My usual repertoire of tools of capture – camera, pencil, ink, paint, found materials- were reprioritised as I honed in on the microscopic detail of my subject – initially the water and organisms surrounding the thrombolites of Lake Clifton, followed by the surface and internal structure of a particular thrombolite sample. Whilst attempting to visualise a journey into the past, from the outer layers to the centre of this life form, my investigation encompassed the aesthetics of microscopic detail as I explored ways of transferring knowledge gained scientifically into my visual vocabulary and artworks.  The outcomes include film clips (which have been edited into a short film), suites of digital images and prints.